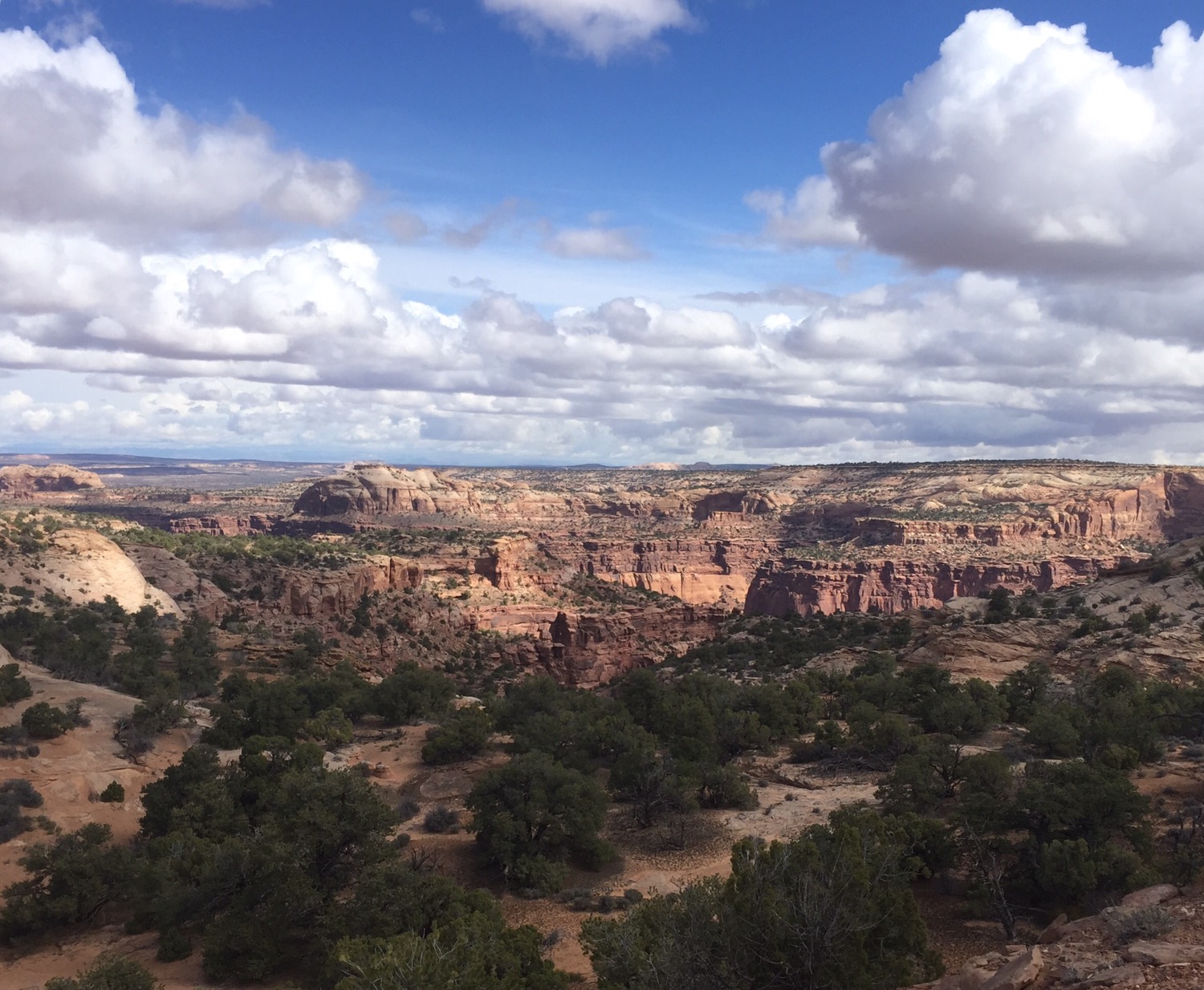 Utah. Like you, the first thing that comes to my mind is inevitably Mormons. Joseph Smith. The whole nine of LDS stereotypes. But if you’ve ever visited or seen the state sponsored advertisements for Utah boasting five national parks and impossible views, you also know that its a land of natural wonders. I got to visit four of them and was impressed by the diversity of beauty of each one.

After weathering an unseasonably snowy winter storm in Denver, Cocoa and I headed further west towards Canyonlands National Park, my first destination in Utah. Canyonlands is split into three separate districts: Island in the Sky, Needles and Mazes. From within the park, you cannot get from one district to the other, nor are they close together (Needles is about 2.5 hours from Island in the Sky, and Mazes is considered even more remote). Not surprisingly, each district has its own distinct feel. Mazes is the least visited with the fewest facilities, and primarily a backcountry camping and hiking destination. Island in the Sky, as the name suggests, is perched above the canyon and provides breathtaking, panoramic views of the canyons below. Needles gives visitors the opportunity to explore the interior of the canyons up close with an extensive network of hiking trails and backcountry campsites.


Upon arriving at Island in the Sky, I was excited to snag one of twelve first come, first served campsites, but was literally blown away by how windy it was. This wasn’t just a “hold onto your hats” windy; it was a “hold onto the pots and pans, make your peanut butter and jelly sandwich stale within minutes” kind of windy. Unfazed, I set up my one person tent and headed out to check out all of the districts overlooks and was amazed by each and every one.
For someone who loathes winter and cold weather in general, I picked a bad week to camp. I ended up spending three very chilly nights there, sharing my campsite with another woman from Canada who hadn’t beaten the ‘crowds’ for the first come, first served campsites. Even with an extra blanket, winter coat, sweatshirt, hat, gloves, two pairs of pants and two pairs of socks, I froze. The hiking was unbeatable though, and I wish the pictures did more to convey the beauty of the place.

From Island in the Sky, I took a day to drive down to the Needles district, with a long stop in Moab to restock, refuel, and buy a better sleeping bag. The Needles campsites were much better in my opinion- many of the trail-heads start from the campsites, its 10 degrees warmer, and not “hold onto the pots and pans” windy. I did two big days of hiking here- one 7 mile hike from Big Spring to Squaw to Canyon to another, and then a longer, 11 mile hike to Chesler Park. Both were stunning.

While at Island in the Sky, I took a day to hop over to Arches National Park, just an hour away. While Arches does have some hiking trails, this is much more of a drive-around, view the sites type park. With the weather cold and some snow threatening to accumulate, I was all too happy to hop in and out of the warm car every 20 minutes. Despite the blizzard conditions just hours north in Salt Lake City though, the weather turned agreeable and I was able to get some short hikes in around the Arches. Again, stunning.

Scenic Drives on Highway 95 and 24

Excited to escape the wintry mix and give Cocoa the chance to do some exploring with me (national parks are notoriously dog unfriendly), I headed south towards Grand Escalante National Monument (this will be a seperate blog post, stay tuned). One thing that I’ve actually enjoyed about southern Utah (and many of my travels) is the lack of internet and cell phone service. This may sound crazy, but it forces you to stop at the visitors center, to talk to people, and to get the local scoop on things. When I explained my route and asked driving times to a very helpful woman at the visitors center, she gently asked why that was my plan, gave me an invaluable paper map of Utah, and then redirected me along the two scenic routes and the more popular part of the park.


And holy crap, it was beautiful. Canyons, mountains, the Colorado river, you name it. It also felt like a step back in time to some odd, alternate universe. As I drove through small towns, everything was closed because it was Sunday, and things close on Sundays. The only exceptions were gas stations, one of which also boasted four lanes of bowling and an A&W restaurant. For ten glorious minutes, I got a broadcast of Casey Kasem’s Top 40 from April 1989. George Michael’s “Father Figure” and John Cougar Mellancamp’s “Check it Out” were #7 and #8 on the charts that week. Other than that, the radio was mostly static, except for an ever persistent “unbiased news source, Fox News Radio!”, or Glenn Beck, or some religious testimonial radio stations that I didn’t tune into long enough to learn the tagline. I got a cabin in a small town for $50, went to a coin operated laundromat, and unfortunately missed out on a proper dinner because everything closed at 9pm.

On the drive, I stumbled upon another Utah national park, the lesser known Capital Reef. What was distinctly different about this park from Canyonlands and Arches, is that the main highway cuts right through the park and many of the trailheads are just off the road. There also is no entrance fee. The 10-mile scenic drive further inside the park reminded me much of the countryside I’d been driving through for the past day, but hiking through the bottom of a canyon, with its walls towering over me on both sides on the Great Wash Trail and then along the edge of the canyon on the Rim Overlook Trail showed off the real beauty of the park.

Bryce Canyon National Park also happened to be along my scenic drive, and this is one that I can say I definitely didn’t do justice, rushing through the more popular overlooks in just an hour. Coming from a 3 day backcountry trip, and wanting to make it to the Grand Canyon in just a few days, I needed to press on. It felt like a tease, and it was, but I will definitely be back one day to properly explore this park.