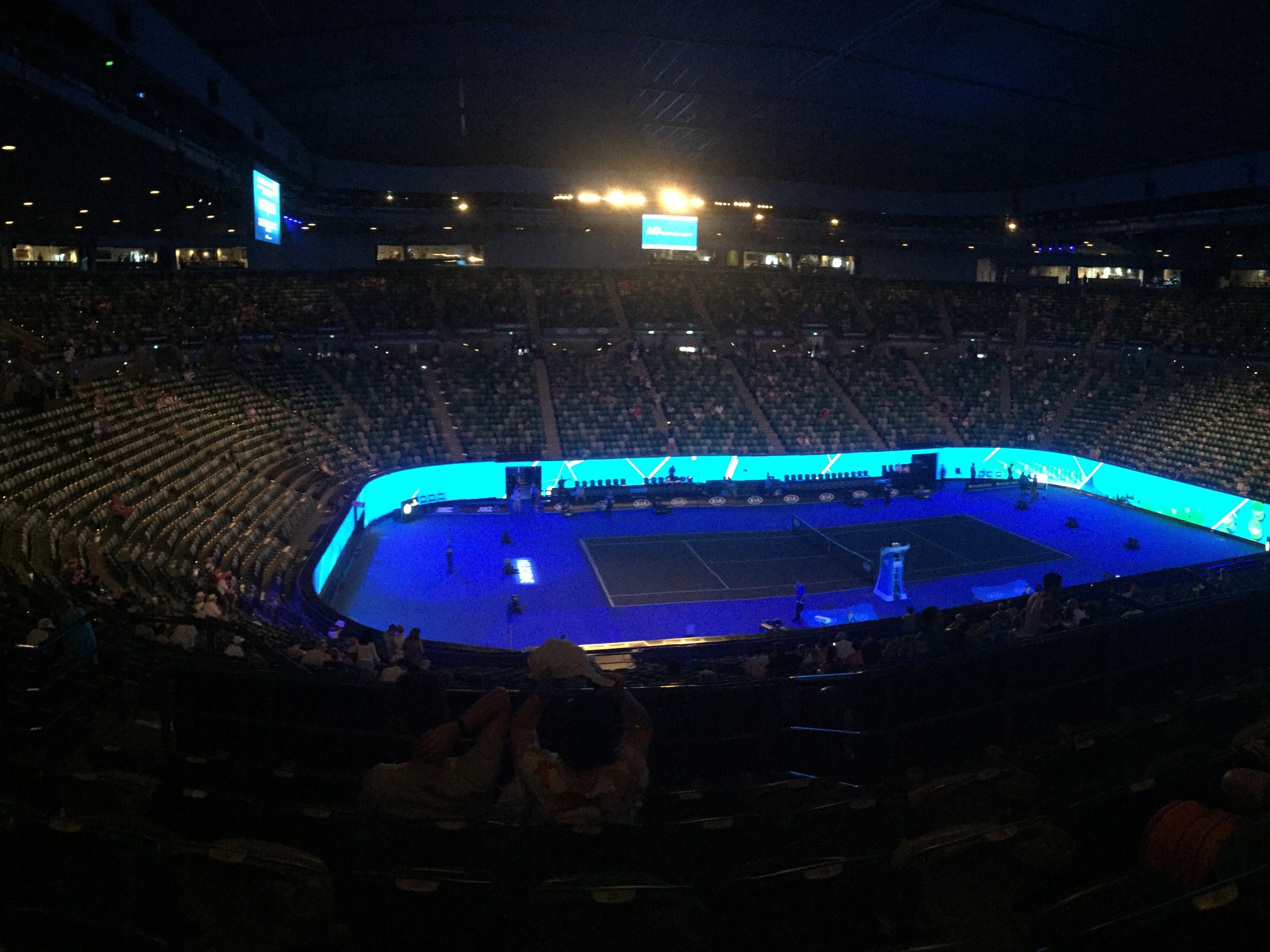 Its not ‘The Australian Open’ or ‘the Open’ or even ‘Aussie open’- most Melbournians simply call it, ‘The Tennis.’ As in, are you going to The Tennis? Have you watched any of The Tennis? I went to The Tennis last night, I’m so wrecked, I should have called in for a sickie!

Being in Melbourne, I thought, I too should go to The Tennis. This conviction came late and so I ended up forking out for tickets in the main court (called Rod Laver) in the mens quarterfinals. I carefully picked my single seat, hoping for something not too nosebleed and next to nice, social people.

Without any expectations, I wasn’t sure what I was headed for- during play I knew they revered silence, but all other accounts I’d heard gave it much more of a carnival atmosphere. Both are accurate. The two main courts are surrounded by outlying courts where early rounds and other tourneys are played (think juniors, amateurs, etc). Near the entrance was a large screen on a small lawn, full of tables and chairs and sunburned, tipsy tennis-goers watching replays waiting for the next match. Concession stands sold terrible, overpriced hotdogs, light beers in plastic cups whose size don’t match their price tag, and canned ‘cocktails’.

I bought a beer and a hot dog, ate the hot dog, and went to find my seat. The man checking my ticket assured me that yes, I could take my beer inside the court. To my pleasant surprise, ten rows from the top wasn’t as nosebleed as I had expected. I’d thought I’d be the $7 seat at the Royals game, in the upper section of the upper deck, off in the corner. However, all of the seats in Rod Laver would have been considered ‘field level’ by any US baseball or football standards. Score.

Due to the threat of rain, the tournament officials opted to keep the retractable roof closed, turning the stands into a large oven capable of roasting 15000 humans. I went out for another cold beer, and returned as more people filed just before the start of the first match (they were surprisingly punctual – most arrived at their seats less than 10 minutes before the match started and only a select few were late…must have been the heat).

To be frank, the first match stunk. Sorry Aussies. An Australian Cinderella story (my vast knowledge of tennis makes me an expert on this) played a top seeded (Swedish?) woman, and got clobbered despite the crowd’s enthusiasm for their hometown hero. Everything surrounding The Tennis was so enthralling though, that I found myself struggling to pay attention to the match being played.

Growing up, we would make fun of the kids that after every point, scurried onto the court, grabbed the discarded or netted ball, and scurried back to the sidelines. In person, you really get a full appreciation for the level of ‘squirrel bait’ each kid exudes. They all seemed to be that dreadful age where their bodies are growing faster than their coordination, and so their run is best described as a focused flailing. Their outfits reminded me of something a dad would wear in public despite his families’ heartfelt pleading: long-sleeved green shirts tucked into black sport shorts, accompanied by a green wide brimmed baseball cap with a small attached cape, to protect the neck from vitamin D/skin cancer.

What they lacked in cool, they certainly made up for in professionalism. They operated in two teams of six with two kids at the net, and one kid in each corner. The two at the net were the apparent ringleaders, keeping track of how many balls were with each kid, and facilitating the rolling of balls to the kid in need. They knew, because after each point, each kid in the corner would dutifully display their hands, palms out, so the ringleaders could get an accurate count. For each serve, players would choose the best of the 3-4 balls, and unceremoniously discard the lame ones on the ground, and the appropriate kid would ceremoniously rush over to collect them and rush back to their little square.

At the end of each set, there was a flurry of activity as the kids hurriedly rolled all the balls to the new serving side. (Unfortunately, they had to roll them with as little bounce as possible, which meant that they did a rushed, bowling style roll every single time, adding to their ‘coolness’.) Each time the player tossed the sweat towel back at them, they appreciatively folded it up before scurrying back to their allotted square. About halfway through a match, they’d change out teams, and the kids would parade off, single file with uniform gaps between them, arms crossed behind their backs, and facing forward. Needless to say, I was entertained.

The second, less exciting ancillary aspect of The Tennis was the announcer. ‘Sports announcer’, to me, means a crackly voice shouting through a radio, auctioneer style, detailing as much as possible at a pace as fast as possible, to give listeners a somewhat accurate audio account of the play. To be fair, The Tennis Announcer was more of a scorekeeper than an announcer, but for the entirety of two matches, he managed to do the job with only 27 words; and that is counting the 10 that are numbers. My favorite: “Thank You”, which was the politest way of saying “shut up crowd, we are going to start playing now” I’ve ever heard.

Back to the reason for The Tennis, the actual tennis. For the second match, I had the pleasure of watching Nadal v. Monfiels. Nadal, you might know, has been around for some time, so he had his fair share of crowd support. Monfiels represents what I love about sports that can be hard to find at the professional level (especially in tennis)- he gives every ball a go, sometimes leaping and turning backwards, or stopping short and reaching behind himself, and other times doing the tennis equivalent of a Willie Mays catch to try a return. He joked about making a few line challenges, inspecting the spot where the ball supposedly went out (you can challenge in tennis, all players did, Monfiels was the only one I saw jest about it). None of it was show-boating, it was just clear that he really loved the sport and the support of fans.

One thing that was hard to appreciate on TV but was clear in person, was the speed of the game. Nadal had the slower, steadier serve that averaged around 165km/hr. Monfiels’ was less consistent but faster;  one clocked in at 225km/hr. That’s 140mph! I gained a new appreciation for the line judges. Their job is hard. That ball is fast.

The match went only 4 sets, but it was plenty to get me excited about the sport of tennis. In the end, Monfiels’ athleticism and personality did not win him the match. He hit one too many 224km serves into the net, and Nadal advanced on to the semifinals (and finals).

One thought on “The Tennis”