When you take a flight from the US to Australia, you generally leave around 10 or 11 at night from California and arrive at about 8 in the morning, but 2 days later. The goal then, is to stay awake as long as you can, so that you don’t end up with the days and nights of a mixed up newborn.

The first day in Melbourne, I did just that–after the 16 hour flight there was no napping allowed; only exploring. After donning a cute outfit, doing some wandering, and fueling up on food and several lattes, I thought a Wednesday afternoon would be a great time to check out a museum without the crowds. I found myself at the Melbourne Museum, along with every class that was lucky enough to have a field trip that day. To my sleep deprived self, it felt like every school aged child Melbourne was there, and that museums did not garner the same quiet respect as say, a library.

For what it lacked in serenity, the museum made up for in its eclectic offering of exhibits: one on the history of Melbourne, one on traditional maritime vessels of indigenous seafaring folks, and another outdoor garden area featuring plants native to Australia and New Zealand, just to name a few. In my book, two took the cake. An exhibit/homage about a beloved racehorse named Phar-lap, complete with letters that schoolkids wrote to the horse and the horse’s actual, preserved skin, managed to capture the heart of even a sleepy, overly caffeinated foreigner. The second, I can only describe as: The Exhibit Where Someone Said, “Wow that’s so cool! That thing should be in a museum!” about a particular family heirloom…and then they actually put that thing in a museum. There were small trinkets, tools, and knickknacks ranging from 50-100 years old.  4 display cases full of them, donated mostly by families. I was just happy that so many of those things found their way to a higher calling. 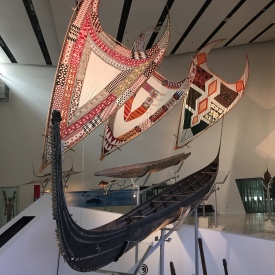 A few days later, back on the home front, I knew I’d be the hotel for much longer than you want to live out of suitcases. So, my first challenge: trying to fit 90% of the clothing I owned in a large but poorly equipped closet with only one hanger and a cheap, small nightstand/set of drawers that would be proud to even earn the IKEA label. This should have been my harbinger that some things would be easier abroad, and other easy things would be annoyingly difficult. Easy: public transportation. Hard: finding a shopping center to buy hangers, when you know what block its on (and its only a 10 minute walk from your hotel). Also hard: digesting 10 step-by-step instructions to run a load of laundry in a washing machine, and guessing at what the cryptic symbols on the oven and dishwasher mean.

The most challenging of these little adventures by far, has been the apartment hunt. The process to me is mind-boggling, but everyone adheres to these rules and so you don’t really have a choice in the matter. Basically, places available for rent will advertise an open house, and you must register your details to attend. You’ll be viewing the house/apartment with, at times, as many as 20 other applicants. Oh, and these open houses are generally 10-15 minutes, sometimes during a random day during the week or if you’re lucky, on Saturday morning. So- to drive this home- a house might only be shown from 11:10-11:20am on Saturday the 10th, and 15 applicants will show up to view the house in that 10 minute window. Its intense.

It took me about a week to realize that my ‘short-list’ of requirements did not match up with my budget, but only after viewing some very ‘cute and charming!’ places. I saw a place with a window between the kitchen and master bedroom, another with a massive staircase from the master bedroom leading up to an open attic, and one home that ‘featured’ an outdoor toilet. The straw that broke the camels back, was a cheaper place a little further from town, that had a sensory deprivation shed/room at the back of the lot and an adjoining shed with an actual dead rat. After some much needed soul searching (aka, for the first time in my life, I made a budget and figured out what I could spend, rather than just being a cheapass about rent), I found a great spot, close to a happening part of town, newly remodeled, with room for visitors. I move in in a week. Who’s coming to visit??