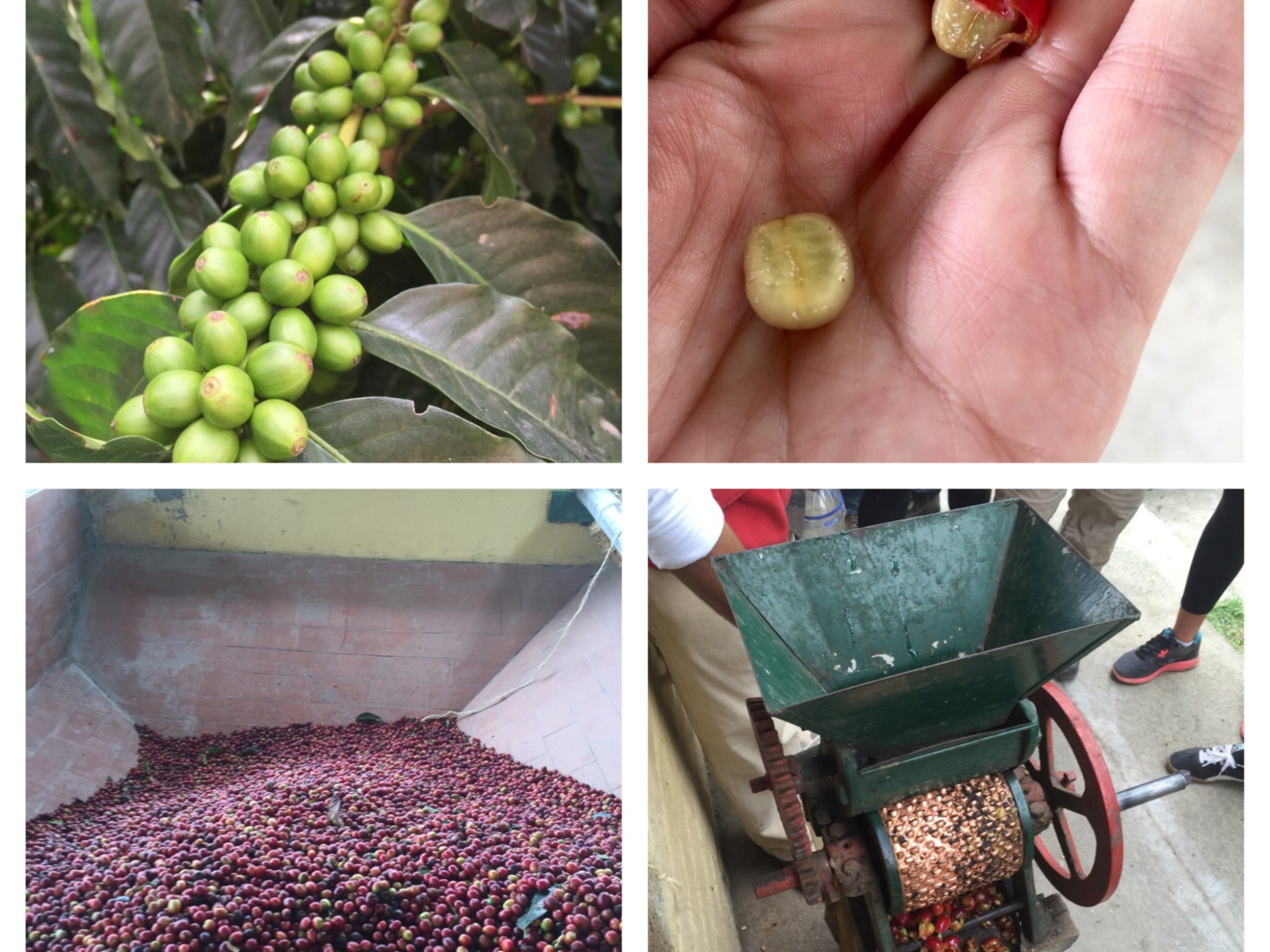 Do they grow on trees? Underground? Do they come off the vine all brown like that? I don’t know if you’ve ever contemplated where coffee comes from but I had many images whirling around in my head as I headed to Salento in the coffee valley of Colombia.


So, just to logistically catch you up on my travels, we left you in Rio. After Rio, TJ and I headed down to see Foz de Iguaçu; a crazy ass waterfall on the border of Brazil, Argentina, and Paraguay. It was amazing and a longtime dream of mine; seeing both sides was definitely worth it, and I even got in for a little swim on the Argentian side at the bottom of a small waterfall (in a designated area, don’t freak out mom!). The size, the power, the sheer amount of water was awe inspiring. I was awed. That being said, Google has way better pictures and there weren’t a lot of shenanigans to be had (by me at least, TJs blog would be very different…). From Foz, we flew to Bogota for a day and then onto Salento. 🙂
Salento is a tiny 174-year old town in the mountains with colonial type architecture. They are known for their trout and their coffee, and once a year for a very popular Christmas/New Years celebration. We happened to be arriving the weekend of that celebration (yes, on Jan 8th…) and so the town was absolutely packed. We’d be there for 3 days and booked in at a hostel called Kasaguadua Nature Reserve just out of town. Before we get to the coffee business I want to share more about the hostel, the town, and a hike that I got myself into in.

First–the “hostel”. I’m putting air quotes around it because it really was more of a nature preserve with a house and a small dorm for travelers. Two guys, Carlos and Nicholas met 12+ years ago at a canceled conference in South Africa and hatched a vision of conservation and education. They left their “real” jobs (Nicholas was an investment banker in London, Carlos I’m not sure) to start the preserve. Around Colombia, many were destroying the forests and ecosystems, unaware of unsympathetic to the long term effects. They built the house themselves, along with an “ecopod”, an office, sleeping quarters for themselves, and a shed. What’s even more amazing is that this home, a 40 minute walk from town and a 15 minute hike down from the road, also has all the modern conveniences you’d expect; clean drinking water, hot showers, electricity, gas stove, wifi, and satellite TV. (It was also hands down the cleanest “hostel” we’ve stayed in and the best breakfast we’ve had).
I tagged along for part of the tour of the grounds one day and learned more about their vision and how they have realized it. Basically, they wanted to create a model for living with the minimal amount of impact to the earth while still enjoying all of the modern day conveniences we have come to love and expect. The house is mostly made of a Colombian bamboo called guadua. They collected the guadua from the surrounding forest, and it’s actually a grass, not a tree. The guadua absorbs water during the day and releases it at night; anyone who has built anything out of wood knows that wet wood is bad news bears if you want anything to stay straight. The absorption also varies with the cycle of the moon. To get the guadua with the least amount of water possible they harvest it only between 2-5am and only during a waning moon. As its a nature preserve, they only take 25% of the total that is at the proper age to be harvested (at least 4 years). After its cut, I’m fuzzy on the details but it goes through a drying/processing that takes some time before they can use it. The result is a hard sturdy bamboo-looking piece of wood. It took them a few years to get permits and build up the first part of house and they’re in the middle of adding a second floor amongst many other aspirations. For me, it made for a perfect retreat after the bustling metropolis’ of Brazil (and Bogota).

As mentioned before, Salento was abuzz with their annual fair. The town square was full of tents, vendors, and a weirdly roped off area with a bunch pieces of logs lying around. Mark (my fellow college football enthusiast) and I stood and waited by this area as people seemed to gather. There was an announcer but all I could garner was that it was definitely Salentos 174th anniversary and they were celebrating their lumber heritage. We asked the couple next to us, but all I could understand was that it’d be a competition and they liked the smell of sawdust. Whatever it was, it was sure to be a treat.
There was one older guy with a chainsaw, and one big log that they balanced on two other logs so it’d be stable. The crowd had really gathered at this point, and the announcer said some things, and the chainsaw guy started in by cutting some off the bottom, then the top. Then he moved to one side and made a notch. And then another notch. And then cut out a slice between the notches. We had no idea what the hell this guy was doing, just that he was making it look really hard. The notching/slicing went on for at least 30 minutes, when our chainsawer took a step back, stared at the church in the square for a good 10 seconds then went back to notching. Either he was about to make a really life threatening notch, or he was making the church! It turned out to be the latter and after another 15 minutes it kind of looked like the church?


Everyone applauded, they offered it up for the most awkward auction I’ve ever witnessed, and chainsaw guy got ready for part 2, which would be a wood chopping competition against other contenders with the other 8 logs.
This was equally entertaining and perplexing until the end, when a judge counted the number of levels in each contestants tower. After they judged, we had some trout, a beer, went out to the lookout, and then made our way back to the hostel.

This brings me to the final story before we talk about coffee. Now that the festivities were over. I was keen to do some hiking and had heard that the Cocora Valley was the place to go. Not too keen though; after staying up until 1am to find out I’d taken 2nd in our family college bowl pool 😢 (winner takes all, I needed Clemson) I slept in and got a bit of a late start. I took a Jeep Willy (the local taxi, yes it was a jeep) to the edge of the park and started my adventure around 10am.

It started flat and then climbed as we started up a mountain and crossed the small river on the rickiest bridges I’ve ever seen. I befriended a Colombian woman from the Jeep named Marta and we spoke in broken Spanish and hand gestures on our way up to the Hummingbird house.   The next part of the hike was the more…interesting one, where I failed at math, Spanish, and telling time to arrive at what I thought would be a “view panoramica” but ended up just being a…house. For a 2 hour uphill climb, I was pissed. I busted ass to make it back down before dark and caught a ride on the back of the last jeep Willy back to town.
Which brings us to the final day in Salento, and my coffee tour! The tour was short but enlightening and the coffee had quite the fruity taste to it. First of all, coffee beans come from a fruit about the size of an unpitted cherry and they grow on these short tree/bush looking plants. Despite my previous mental image (and maybe yours too) they don’t start off brown. They grow on trees/bushes and the bean is the seed of a small fruit that is picked when it’s red and ripe, which generally happens twice a year in Colombia. Once picked, the fruit portion is husked off and you’re left with two small, slimy yellow seeds. These are rinsed and dried and the “bad beans” are filtered out by size and then by hand. (The guide told me he couldn’t name brand names, but said I was close when I asked if they are used to make Nescafé…).

The beans have an outer shell that is removed, and then they are roasted in ovens. The lighter roasts of coffee are in the oven for less time and actually retain more of their caffeine. Darker roasts also generally have less of the natural flavor of the bean due to longer oven times. After roasting the process is complete and you have the bean that you and I would recognize as coffee!